The ZWO ASI 120 Mini is a top-notch monochrome guide camera, well suited for both planetary imaging and acting as a guider to amplify the usefulness of other astronomy instruments. Despite being qualified as a 'miniature' camera, it still operates at a high level of performance; with a peak QE over 75%, a typical read noise of only 4.0e, a pixel array of 1280 x 960, and a pixel size of only 3.75 micrometers, it qualifies as a powerhouse despite its small size. It achieves all of this while presenting a small and slender profile, taking up a minimum of space in your imaging train. The interface for this camera is a Type C USB 2.0 port, similar to that found in several mobile phone types.

The ASIair Pro WiFi Camera Controller is a smart WiFi device that allows you to control all ASI USB 3.0 cameras, ASI Mini series cameras, and an equatorial mount. With this device, you can plate solve, auto-guide, sequence, and capture deep space images with your phone or tablet!

The ASIair Pro can preview images in real-time. It will de-Bayer images from a color camera and automatically white balance images on the fly. You can also zoom in on a small area and use the half flux width half diameter graph to focus your telescope perfectly. The ASIair Pro will also switch between automatic and manual stretching so that you can get the most detail out of your deep space images. Autoguiding with a portable imaging setup requires you to bring along a laptop, often with multiple programs installed to both successfully capture images and autoguide. Also, often with multiple programs installed for image capture and autoguiding. However, the ASIair Pro is designed to handle both autoguiding and image capture at the same time so you can control everything from a single smartphone or tablet. The ASIair app is available for both iOS and Android products. As long as you have a charge, you'll be able to control your entire astro-imaging setup from anywhere.

The ASIair App also speaks with the SkySafari apps. You can now plate solve in the ASIair app and sync the mount's position in SkySafari!

Four USB Ports to control up to four devices:

USB 2.0 Ports
The ASIair has two USB 2.0 Ports that allow you to control two devices including a German Equatorial Mount.

USB 3.0 Ports
The ASIair has two USB 3.0 Ports that allow you to control two more devices including a German Equatorial Mount.

Micro SD Card Port
The ASIair has one micro SD card port for running the operating system. A 32 GB card with the OS pre-installed comes standard and has 25 GB free for storing images. 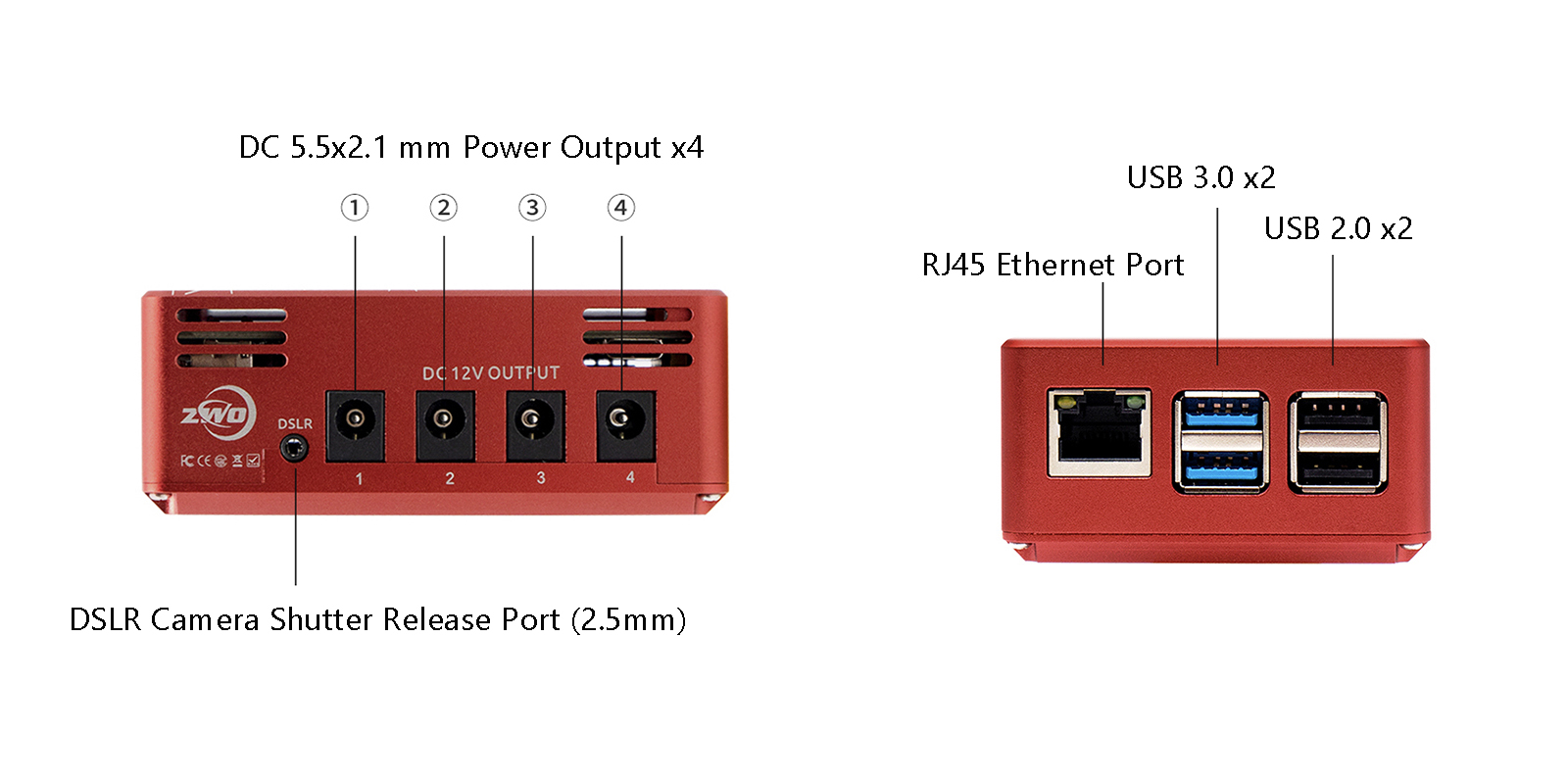 The ASIair Pro works with all ZWO Pro, Cooled, USB 3.0 and Mini cameras. The standard USB 2.0 ASI 120 cameras are not compatible with this device. We recommend that you look into the ASI 120 Mini as an alternative guider or the ASI 120 Superspeed cameras for planetary imaging.

ZWO has tested iOptron and Sky-Watcher mounts for compatibly. But any equatorial mount supported by SkySafari will work as well.